Give me the scoop on Benedict II.
Benedict II, a Roman by birth, was educated from a young age and served the Church for most of his life. His defining qualities as a young man included a vast knowledge of Scripture and a great singing voice, and his contemporaries loved him as both priest and pope for his generosity, commitment to the poor, and his humble nature. Though little is known now about Benedict II’s life, these qualities alone led to him being venerated as a saint. Pretty impressive. Benedict II, like Leo II before him, reigned for less than a year and died on May 8, 685 at the age of 50.

What was he known for?
Pope St. Benedict II is known for securing a big win for the Church in the form of abolishing the need for emperors to confirm papal elections. See, Benedict was chosen to succeed Leo II in 683, but wasn’t able to take office until mid-684, thanks to a rule that required approval from the emperor before consecration could take place. Once in office, Benedict was probably thinking, “Popes don’t have time for this,” and was thus motivated to work out a deal with the East, substantially cutting the time it took between election and consecration for future popes.

Fun fact: Benedict II was the third pope in a row who’s now recognized as a saint. And yet, only 1 out of the next seven pontiffs carries the halo.

What else was going on in the world at the time?
In 684, Halley’s Comet (yes, that Halley’s Comet) was observed in Japan. It’s currently Japan’s oldest recorded observation of that particular comet.

Missed a day? Click here.
About Popes in a Year
- We send these Monday-Friday (NOT on weekends)
- Know someone who wants to sign up? Send them to flocknote.com/popes 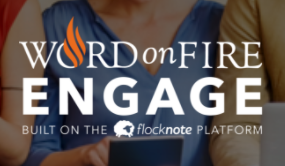 Flocknote has partnered with Word on Fire to give you a proactive approach to engaging your busy on-the-go parishioners.

If you'd like more info for your parish, or to pass along to your pastor, click below and we'll send you some!
Word on Fire ENGAGE + Flocknote
Sent by Karin Kirby on Tuesday, April 23, 2019 at 2:00AM